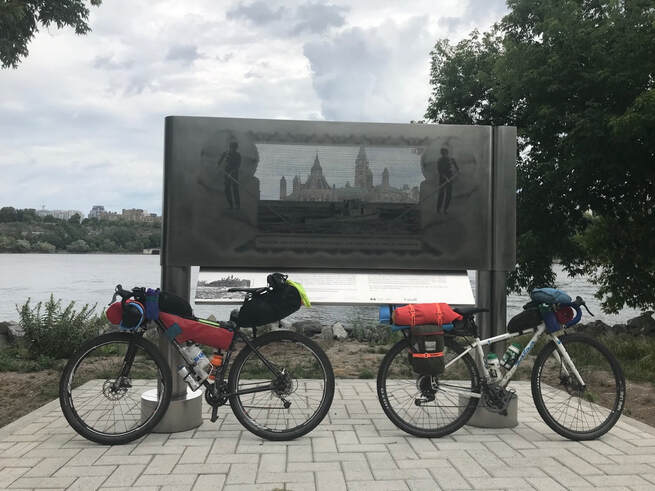 We would like to acknowledge the Anishinaabe (Algonquin People) for their care and stewardship of this land. In an email to us Elder Albert Dumont from Kitigan Zibi Anishinabeg shared the following:
“All the areas you refer to in your email are on traditional Algonquin lands. You will be biking through places connected to the Ottawa River watershed. We are the 'People of the Great River'. You will see the greatness of our territory, its richness in resources and its wonderful waterways and spectacular trees. The Anishinabe, the People, had all they needed to live long, healthy and full lives in their territories before the arrival of Europeans occurred. I expect you will acknowledge this fact wherever and whenever you can as you move forward.” 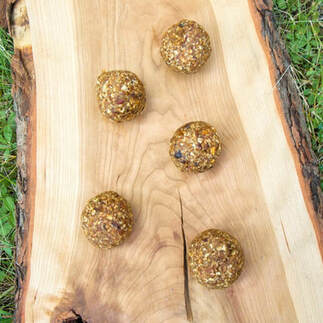 The Story
​​
With family and friends on both sides of the Ottawa River and up the Gatineau Valley it seemed natural to spend our long weekends visiting them by bike. For over 40  years we have been exploring the region by bike, canoe and on foot. Based on our bike travels with various set-ups (tandems, tandems with trailers, 'cross bikcs and bikepacking rigs) we have selected some of our favourite roads and trails and shared them  in this route.

The Log Driver’s Waltz Bikepacking Route was conceived to showcase the picturesque  landscape, historical sites, and varied culture of the Ottawa Valley and Outaouais regions. It follows the natural contours of old roads, trails and waterways that continue to play an important part of life in the region.

Prior to the arrival of European settlers most of the Ottawa River watershed was covered in vast stands of Eastern White Pine, a tree which is still omnipresent and is featured on our logo. As much as logging is still important economically in the Ottawa Valley, it’s reassuring to know that riders of the Log Driver’s Waltz will be able to celebrate many of these majestic giants in their living state.

As the pine was cut down for sale to Britain, settlers moved in behind the loggers to build roads and establish farms. As you ride along the historic roads you will see the remains of buildings, cedar fences and stone walls in places that you may find surprising. In the winter months, many of these settlers worked in the lumber camps stockpiling logs for the spring log drive. Following the spring ice break-up the logs were floated downstream on the Mississippi, Madawaska, Ottawa and Gatineau rivers towards Bytown (now known as Ottawa) where they were prepared for export. Along the way logs often got caught up in log jams in rocky rapids, at which point in a spectacle to behold it was the daring nature of the log drivers who “danced” out under perilous conditions onto these wood piles to free the logs and keep them floating downstream. The light feet and bravado of the log drivers was captured in the National Film Board short film Log Driver’s Waltz from which the route took its name. (The film was directed and animated by John Weldon and released in 1979.) Click on this link and watch the video if you want an earworm that can last you 800 kilometres! The song itself was written by Canadian folksinger and songwriter Wade Hemsworth who often likened the log driver’s motions to dancing. The NFB released a French version of the film, which was also interpreted by the McGarrigles. Canadian country music artist Stompin' Tom Connors made one Quebecois logger Big Joe Mufferaw ​(Jos Montferrand) the star of a 1970 chart-topping song. See if you can pick out the landmarks and geographical features he mentions in his song as you ride the Log Driver's Waltz Route.

In many parts of the region where agriculture has not proven viable there is now a robust and thriving maple syrup industry. Some of the modern operations collect the sap with tubing that you may see snaking through the woods as you pass by. Also visible are the sugar shacks where the sap is boiled down into the iconic sweetener. Logging for both softwoods and hardwoods continues to this day without the shanties and river drives. Instead, logs and harvesting equipment are now moved by truck. Thankfully, not all the towering white pine was felled by the ax and riders of the LDW will surely enjoy catching a glimpse of these friendly giants.

The arrival of the region’s railways allowed for the harvesting of hardwoods such as maple. Mines also flourished in the Pontiac region though they are now quiet. As the resource extraction declined and people tired of working unproductive land many moved away to larger centres. With declining population and the advent of road transport a number of the railways were abandoned and torn up. In some cases older roads have fallen into disrepair and been reclaimed by Mother Nature. As bikepackers, we can now take advantage of these historic routes, rail lines and trails to travel in relative quiet through beautiful terrain.

Here is the official energy food snack of the Log Driver's Waltz. Take these along to fuel your bikepacking adventure and you'll end up feeling like it's time to do the sugar shack shuffle.

Place dates in a bowl and soak in warm water for 20 minutes. Drain and pat away excess moisture with a paper towel.

In a food processor, blend together oats, pecans and dried apple into small pieces. Add drained dates, maple syrup, vanilla, cinnamon and salt; blend until mixture sticks together. Roll into 1-inch balls. You should get about 14 balls.

​Route Developers
Jen Adams and Eric Betteridge
​Jen and Eric enjoy long distance biking, skiing and canoeing trips.
They began exploring the backroads of  the Ottawa Valley  with their children on two tandems in the early 2000’s. Realizing that the gravel roads were quieter (safer) and much more interesting than paved ones they began to actively seek them out. Over the years they have explored north, south, east and west of Ottawa. They believe that the Ottawa Valley is one of the best places to live on this planet, and certainly one of the best places to cycle. With family roots on both sides of the Ottawa River they have connections to many of the communities, large and small, that “The Log Driver’s Waltz” passes through. They are excited to share this landscape and its history with riders from far and near.
“The Log Driver’s Waltz” Bikepacking Route had it’s genesis in a conversation Jen and Eric had after completing the BT700 in the summer of 2019. They recognized that if they linked portions of shorter routes  they had travelled over the years it would be easy to create a longer and more challenging route that would showcase some of the best riding the region.
Acknowledgements
We would like to acknowledge the mentorship  and guidance of Matt Kadey  as we developed the route. Matt is a prolific route planner in southern and central Ontario. You can find his routes at  http://www.bt700.ca/ . Matt generously shared his technical expertise as we went through the process of mapping the route and creating the website.
Thanks to Adrian Grant of www.ridegravel.ca for his route suggestions and identification of crown  land camping spots along the LDW.
David Wright had some great intel that led us to the old train tunnel under HWY 17.
All our friends and acquaintances who have made suggestions and requests since we released the Log Driver's Waltz for the inspiration to create a suite of routes to meet the needs of riders of different levels and aspirations. You folks make it all worthwhile.
​