Based on the Log Driver's Waltz and created to allow bikepacking without crossing the Ontario-Quebec border during lockdowns these routes maintain all the key features of the main route and include bonus territory that we are happy to share with you. 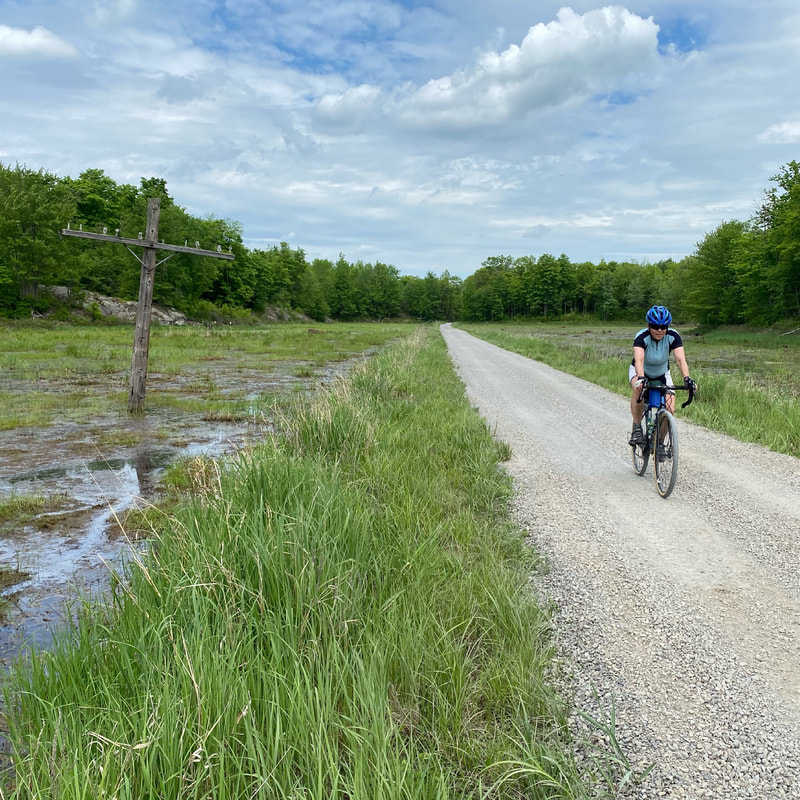 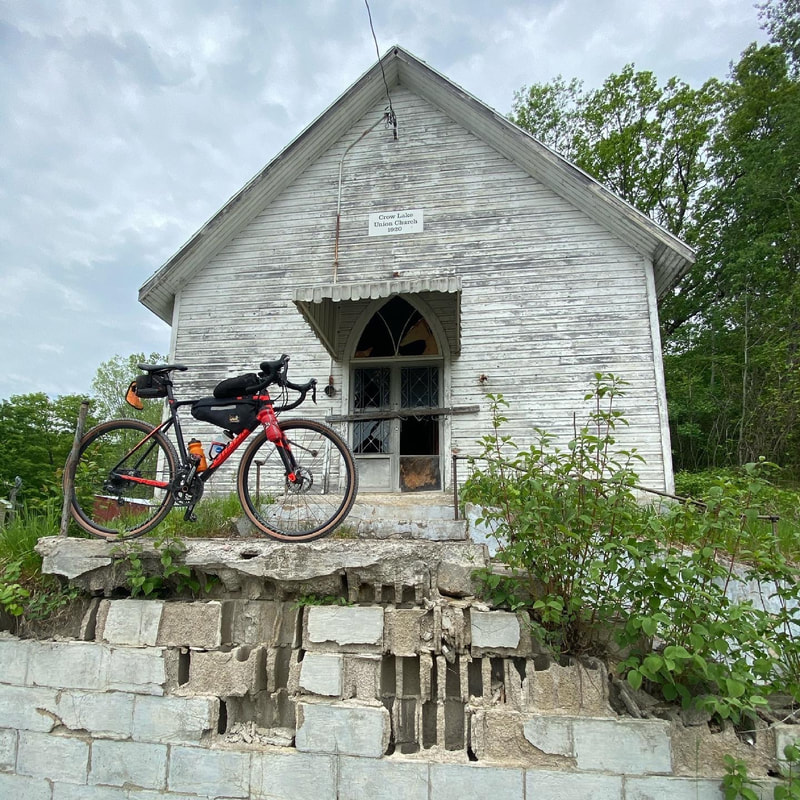 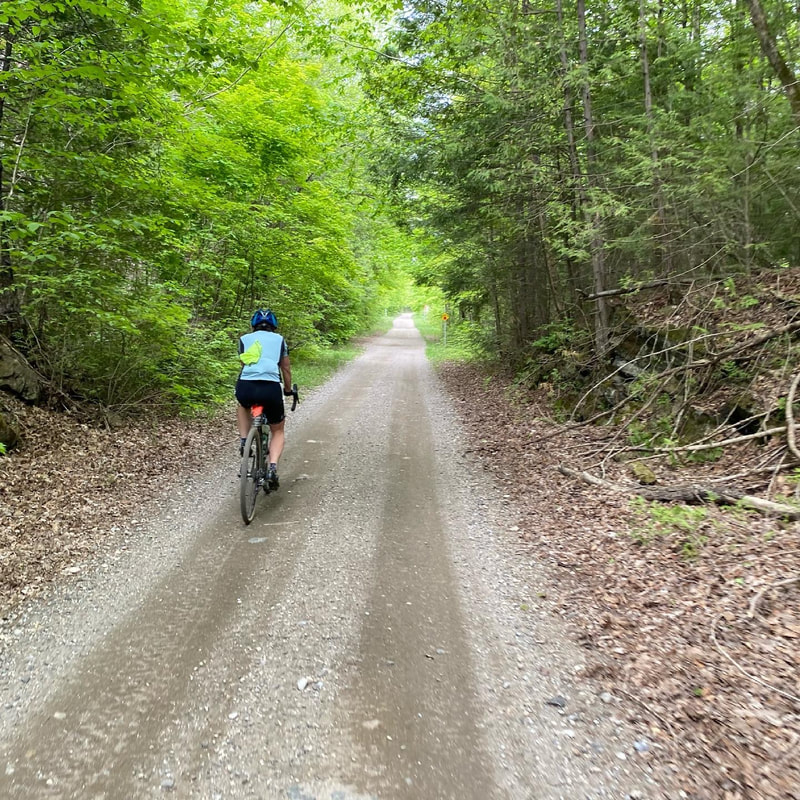 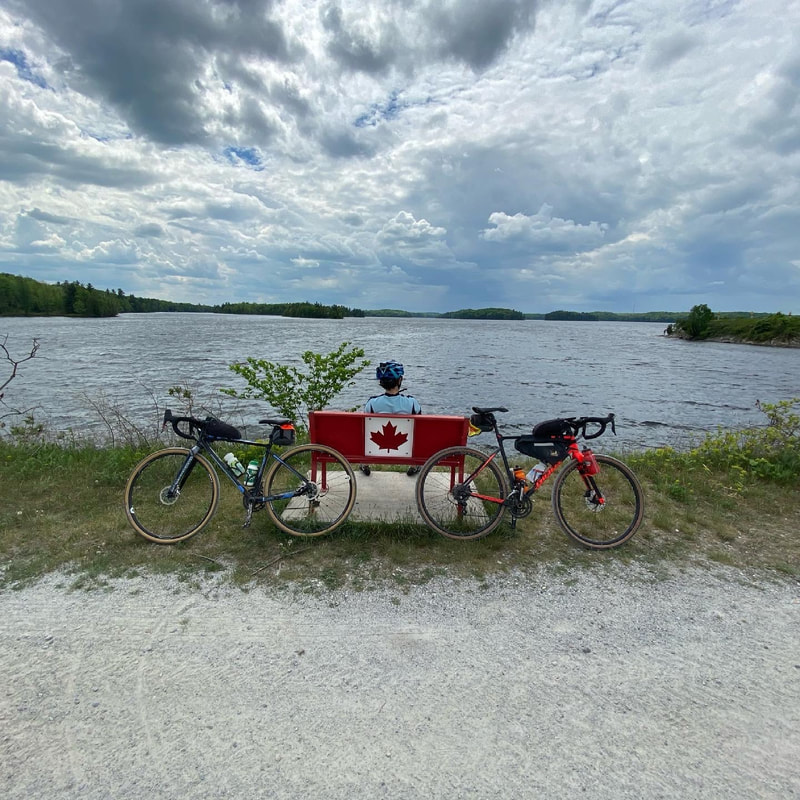 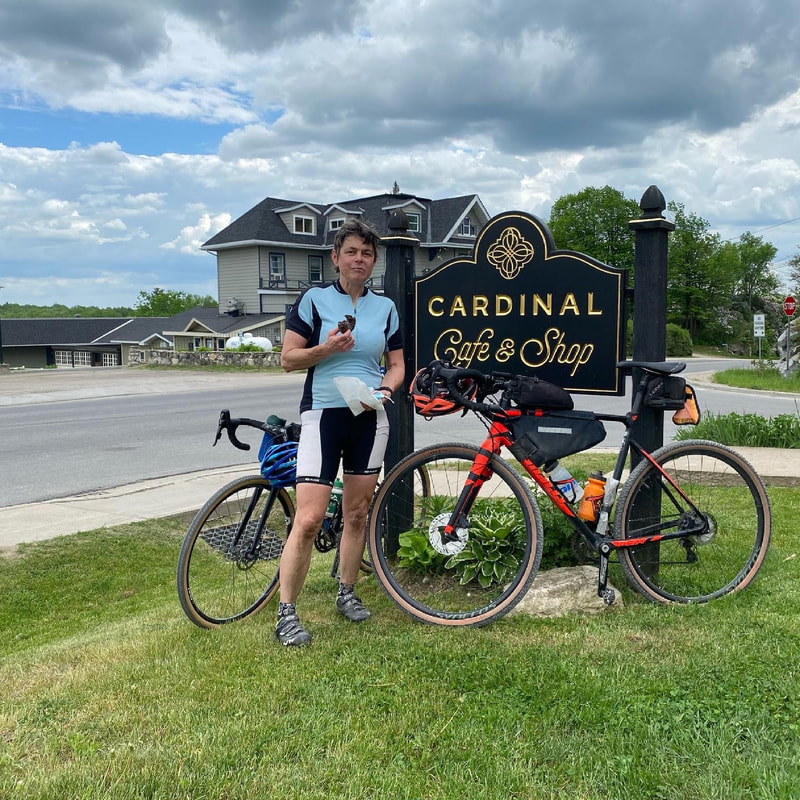 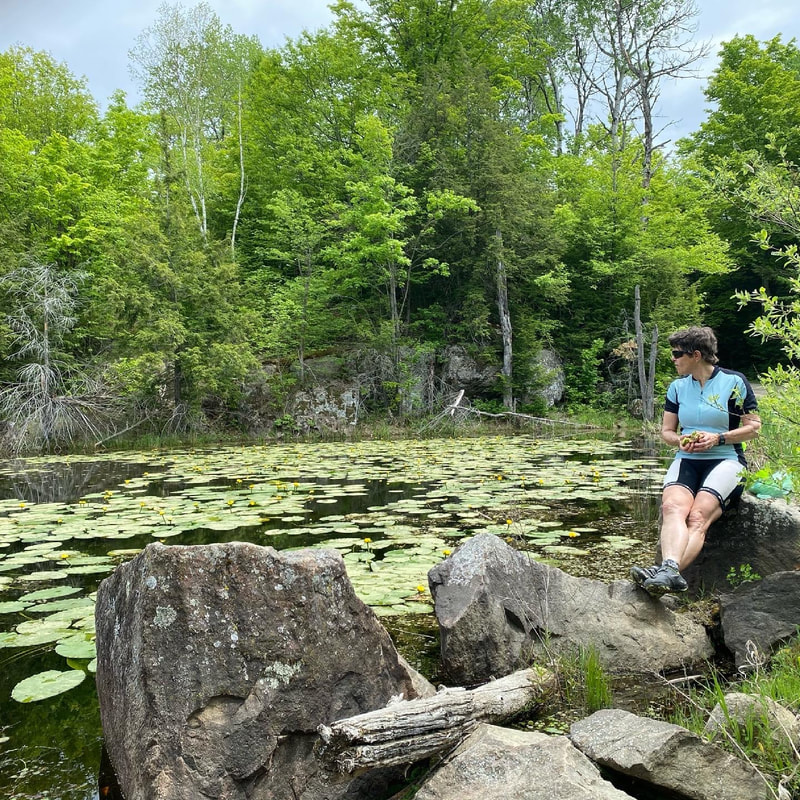 L'EGGs Route
In the height of the last ice age Lanark County was covered by a glacier two kilometers in thickness. When the glaciers melted away they left many reminders of their presence including large boulders, or glacial erratics, randomly distributed around the countryside. Keep your eye out for them as well as sand and gravel deposits and mining on your perambulations as you follow the Erratics Route.
Located in the Lanark Highlands of the Ottawa Valley the Erratics Route starts and finishes in Carleton Place, Ontario. The communities of Ashton, Perth, Sharbot Lake, MacDonald’s Corners, Lanark and Almonte provide options for food and lodging along the way. With a little over half the elevation gain the Erratics Route is a mellower ride than its energetic cousin the Sugar Bush Stomp . Swinging east after Carleton Place it passes Ashton and its microbrewery, and takes the rider south of Hwy 7. Following country roads, including a deek to hook onto fabulous Gillies Sideroad with its radar dome, the route curves west towards Perth with its beautiful Stewart Park and a good variety of food and accommodation options. There is little in the way of services between Perth and Sharbot Lake so the prudent rider will stock up before embarking on this leg of the journey.Paralleling and sometimes crossing the Tay-Havelock rail trail and the active train tracks the route climbs gently whilst following bucolic gravel  roads to Crow Lake, remarkable for its abandoned church and short section of paved road. Curving around small lakes, wetlands and ridges the route has a few punchy ascents and descents as it continues generally westward before taking a short hop north on the K and P rail trail. At the point where the route turns left off the K and P to cross HWY 38 riders who wish to get to Sharbot Lake sooner can shorten the travel time to Sharbot Lake by continuing north on the rail trail.
After crossing HWY 38 riders can expect hilly gravel roads and a short section of ATV trail before rejoining the K and P just south of Sharbot Lake the halfway point of the Erratics Route. With a bed and breakfast and a motel right on the route and a provincial park nearby Sharbot Lake might be a logical place to look for overnight accommodations.
Passing under HWY 7 on the K and P Trail riders will then turn east and make their way towards MacDonald’s Corners. Mixed with a few short sections of pavement the route will follow some of the sweetest gravel roads in the Lanark Highlands including the Levant Mill Rd and Ranger Station Rd. After passing through Poland (no visa required) riders will take a short loop on the White’s Cemetery Rd for a bit of “unmaintained” experience before heading almost due south to Lanark where a variety of roadside food is available. A look at the map here will remind the rider that there are no stores between Lanark and Almonte. Bring some food and top up your water bottles before leaving. You will want to keep your energy levels up and be in good spirits to enjoy the ride, including the rollers on California and Bellamy roads.
Almost home, you can find refreshments from ice cream and coffee to beer and burgers in Almonte. Follow a section of the classic Old Perth Road, a jog on Concession Rd 4A and finally Quarry Road into  Carleton Place. If you are peckish this is a fine place to take advantage of the many purveyors of victuals and beverages, perhaps overlooking the Mississippi River.
Safety Note: There are several “uncontrolled” railway crossings on this route. Always check carefully before crossing.
Name suggestion: Kathy Tang. Thanks, Kathy! 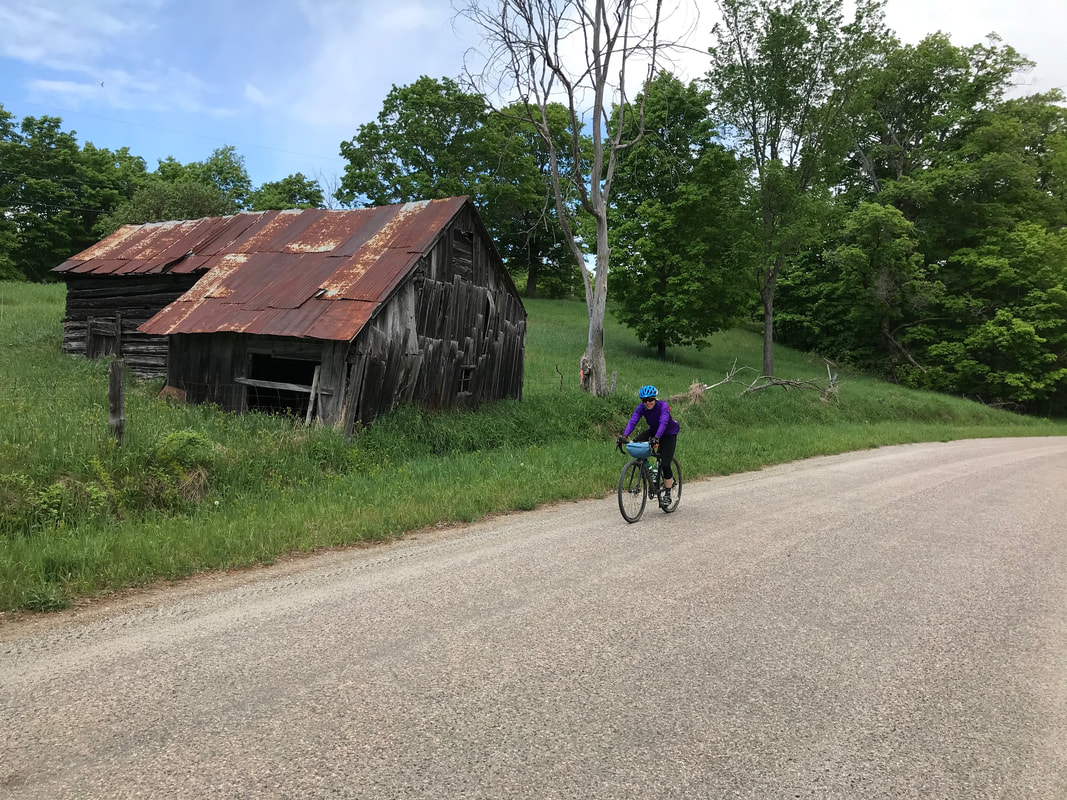 Sugar Bush Stomp
Faster loading map for navigation can be found here.
The Sugar Bush Stomp starts out in a mellow manner on the well maintained roads and rail trail between Almonte and Carleton Place. There is a short section of unmaintained road just before Carleton Place as an appetizer, but the main course will not be served until you have had snacks in Almonte, Carleton Place and Perth, all of which have good eating establishments, cafes  and breweries. After these three towns you will need to plan your refreshments a bit more carefully as the services are more spread out on the rest of the route.
Looking at the profile of the route you can’t help but notice that the larger towns are in the first 70 km. This is the most populous portion of the route and so you can expect to find more pavement. At some point later on your trip you might look back fondly at the gentle start, as after you leave Perth the terrain soon kicks up. A harbinger of what is to come, you will hit two sections of unmaintained roadway before a short section on the MacDonald Corners Road which can have more and  faster moving traffic, so take care. As you turn off onto the Bathurst Line it quickly becomes apparent that you have left the tarmac behind you for a longish while. Be prepared for some areas of overflow during wet times of the year.
As you go along, keep your eyes peeled for old split rail and stone fences marking the edges of  long forgotten fields. There are farmsteads to be seen, some merely the foundations, others in various states of disrepair. For contrast there are often renovated well manicured properties restored to their former glory and then some, seemingly in the middle of nowhere.
Signs of the maple syrup industry, for which Lanark County is renowned, are abundant. Modern technology involves blue plastic tubing feeding sap into large stainless steel holding tanks or drums. Sugar shacks with their distinctive cupolas for letting out the steam abound. Everywhere you will see woodpiles. Split cord wood neatly stacked or in conical piles. Saw logs piled by the side of the road from the previous winter waiting for pick up. Wood still has a vital role in the production of syrup and the heating of homes where the supply is plentiful.
If you are planning to wild camp along the way there are several places where you can do so on crown land. Just remember to “leave no trace”. In North Frontenac Highlands you must reserve a site in advance, but the benefit is that you will know it is there waiting for you at the end of day. Of course there are commercial campgrounds, BnBs, motels and inns so you can choose the accommodation that best suits your needs and style.
Lovers craft beer  will be happy to see both the Calabogie and Cartwright Springs breweries along the route. You may miss the latter if you blink, even on a bike, so note  its location carefully. From Calabogie to the end there is no resupply directly on the route. A detour to Burnstown will bring you to two cafes and a chip stand. Another one to White Lake will yield a corner store. Note the Calabogie Road can be busy with cars, trucks and boat trailers, so unless it is absolutely necessary try to avoid it. The is one short unavoidable stretch which is clearly marked on the map.
After the Burnstown Road expect to find some chunky unmaintained sections, some of it the worse for ATV wear and tear. You will also have some spectacular views over the Ottawa Valley towards the Eardley Escarpment. A sweet bonus of the route is Pakenham where you can have an ice cream while checking out the Five Arches Stone Bridge. Enjoy the mixture of rail-trail, gravel and pavement on the last segment into  Almonte where you may wish to replenish your energy before heading for home.
Recommended tire size for a loaded bikepacking  is 2.1 or 50c.
Note that cell phone service is not available on all parts of the route. 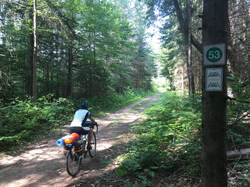